TRD’s ranking of the top 40 investment sales firms in NYC—which included closed investment sales of $1 million and up, ground leases and leasehold interests—found that those four firms racked up a combined $16.5 billion. CBRE had $6.7 billion in closed deals, Cushman had $4.6 billion, JLL had $3.2 billion, and Rosewood Realty Group came in with $2 billion, according to TRD’s ranking, which looked at citywide numbers and borough breakdowns, and was culled from Real Capital Analytics, CoStar Group and many of the firms.

Battle of the boroughs

The fight for dominance is obviously not just limited to Manhattan. It’s also being taken to the boroughs, where large multifamily portfolios are still changing hands. 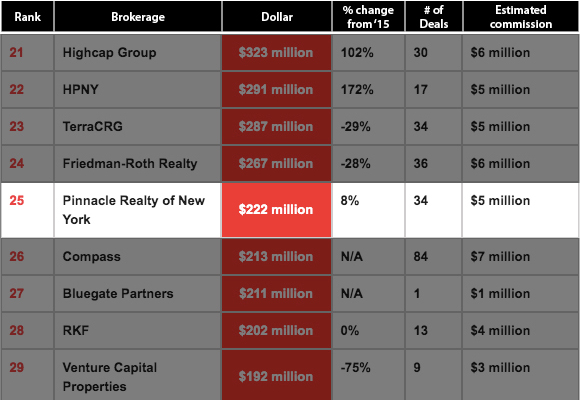 Read More at The Real Deal